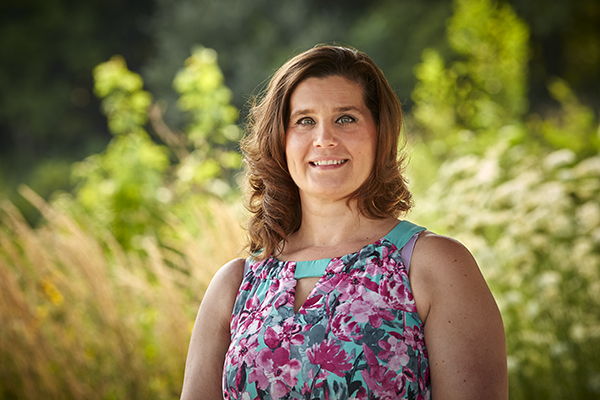 In early 2019, Angela Fitzgerald of Iowa City started feeling “off.” She kept picking up colds and had a hard time kicking them. She initially attributed this to her work environment, as she had recently started a new job at an assisted living facility, and thought her immune system needed some time to catch up. Then one day Fitzgerald felt a lump in her breast.

“I thought, ‘This isn’t right,’” said Fitzgerald. “I called my gynecologist first thing Monday morning and she sent me right over for a mammogram and ultrasound.”

Upon her diagnosis in March, Fitzgerald elected to receive treatment in Iowa City, where she completed eight rounds of  chemotherapy followed by a bilateral mastectomy. There was still quite a bit of cancer in the mass that was removed, so Fitzgerald once again met with her oncologist who put her on an oral chemotherapy. A couple of rounds in, she noticed a lump in her lymph nodes. Fitzgerald underwent a CT scan, which doctors said showed masses in her lungs as well. It was at this point her doctors told her there wasn’t anything they could do to cure her cancer, and she had two years to live.

During her initial round of treatment, Angela had sought out a second opinion with the Nassif Community Cancer Center and Rasa Buntinas, MD, Physicians’ Clinic of Iowa (PCI) Hematology and Oncology in Cedar Rapids. Though she had ultimately decided not to change doctors in the middle of treatment, Fitzgerald never forgot the compassion Dr. Buntinas showed during her visit “I was really impressed by her. I felt she really cared,” said Fitzgerald. “But being in the middle of treatment, I decided not to switch.”

However, after hearing this latest news from her doctor in Iowa City, Fitzgerald made another appointment with Dr. Buntinas for another second opinion. Dr. Buntinas ordered additional testing, and even called Fitzgerald with the results on a Friday night outside of business hours, so she wouldn’t be thinking about it all weekend. Fitzgerald received a more positive prognosis from Dr. Buntinas and decided to make the switch in November 2019.

“When Angela came to us for a second opinion and we reviewed her most recent test results, I thought there was more we could do for her,” said Dr. Buntinas. “After doing some additional testing, Angela’s results showed her cancer recurrence was limited. This meant we were able to offer her a more aggressive curative approach to her treatment, giving her a new, brighter outlook for her cancer journey going forward.”

A Team Approach to Cancer

Fitzgerald also received support on her cancer journey from the team at the Nassif Community Cancer Center in Cedar Rapids. Angela met with Matt Schmitz, cancer exercise specialist, who assisted her with the wellness side of things, including pre-surgery assessment and creating a plan to regain her strength post-surgery and through treatment. Fitzgerald also worked closely with Nancy Yeisley, oncology social worker, during her treatment. Yeisley helped her navigate the financial challenges that come along with a cancer diagnosis. With help from the rest of the team, she was able to identify programs and resources to assist Fitzgerald and her young family with support for daily living expenses and ways to celebrate and be together as a family. She was also there to just listen when Angela needed it.

“It was a blessing to know that there’s always somebody there to come down and just listen,” said Fitzgerald. “There’s so much compassion from the whole team at the Nassif Community Cancer Center.”

Fitzgerald recently started immunotherapy treatments to keep her cancer in remission. She makes the drive to Cedar Rapids each time because of how the team makes her feel. “I didn’t feel like I was just another number walking through the door,” said Fitzgerald. “I needed to be with a team who cared about me and made me feel like a person.”

Dr. Buntinas and her team did just that. “I would drive to see her no matter how far away.”

Whether you’ve received a cancer diagnosis elsewhere and would like to meet with a member of our team to review your case, or you’re already in treatment and would like more information on how our extensive offering of support services can help you through your cancer journey, call the Community Cancer Center at (319) 558-4876 or visit communitycancercenter.org.

Early detection is the best prevention when it comes to breast cancer. If you’re 40 or older, now is the time to be proactive about your breast and bone health. Click here to fill out a form to request a mammogram appointment..

Walk-in Mammograms Available
St. Luke’s Breast and Bone Health also offers walk-in appointments*, so women can fit their screening mammogram into their busy schedules at times that work for them. Walk-in appointments are available Monday – Friday from 9 a.m. to 3 p.m. with a doctor’s order. Simply walk into any of our three convenient locations and receive a mammogram at a time that works for you.

*priority is given to those with a scheduled appointment.

Back To Blog Main Page >>